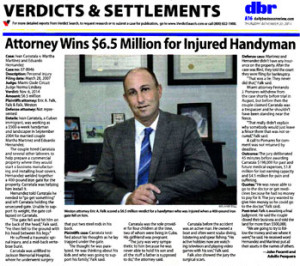 After 400-Pound Iron Gate Landed on Handyman, What This Attorney Did was Impressive to win verdicts settlements

Details:  Ivan Carratala, a Cuban immigrant, was working as a $500-a-week handyman and landscaper in September 2004 for married couple Martha Martinez and Eduardo Hernandez.

The couple hired Carratala and several other laborers to help prepare a commercial property where they would start a business manufacturing and installing boat covers. Hernandez welded together a 400-pound iron gate for the property. Carratala was helping him install it.

Hernandez told Carratala he needed to “go get something” and left Carratala holding the unsecured gate. Unable to support its weight, the gate collapsed on Carratala.

“The gate fell and hit him on the back of the head,” Falk said. “He then fell to the ground with his head between his legs.”

He suffered a traumatic spinal injury, and a mid-back vertebrae burst.

Carratala was airlifted to Jackson Memorial Hospital, where he underwent surgery that put two steel rods in his back.

Plaintiffs case: Carratala testified about his thoughts as he lay trapped under the gate.

“He thought he was paralyzed. He was thinking about his kids and who was going to support his family,” Falk said.

Carratala was the sole provider for four children at the time, two of whom were living in Cuba. His girlfriend was pregnant.

“The jury was very sympathetic to him because he was never able to hold his son and all the stuff a father is supposed to do,” the attorney said.

Carratala before the accident was an active man. He owned a boat and often went scuba diving, lobstering and spear fishing. “His active hobbies now are watching television and playing video games with his son,” Falk said.

Defense case: Martinez and Hernandez didn’t have any insurance on the property. After the case was filed, they told the court they were filing for bankruptcy.

“That was a lie: They never did that,” Falk said.

Miami attorney Fernando J. Pomares withdrew from the case shortly before trial in August, but before then the couple claimed Carratala was a trespasser and he shouldn’t have been standing near the fence.

“That really didn’t explain why somebody would just leave a fence there that was not secured,” Falk said.

A call to Pomares for comment was not returned by deadline.

Outcome: The jury deliberated 45 minutes before awarding Carratala $198,000 for past and future medical expenses, $1.8 million for lost earning capacity and $4.5 million for pain and suffering.

Quotes: “He was never able to go to the doctor or get medicines because he had no money to pay for it. The jury wanted to give him money so he could go to the doctor,” Falk said.

Post-trial: Falk is awaiting a final judgment. He said the couple closed their business and sold the land for more than $500,000.

“We are going to try to follow the money and see where it went,” he said. He received word Hernandez and Martinez put all their assets in the names of others concerning his verdicts settlements.